A Brief History of Chiropractic - How Did It Begin? 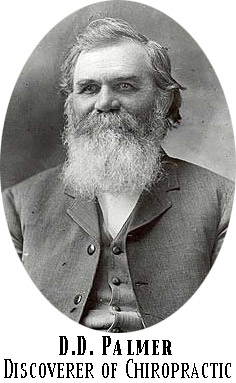 Have you ever wondered about the history of Chiropractic? How did it begin? Who started it all? The roots of chiropractic care can be traced back to as early as 2700 B.C. and 1500 B.C. in writings found in China and Greece. The writings mention spinal manipulation and moving the lower extremities in an attempt to alleviate low back pain.

Hippocrates, the Greek physician, who lived from 460 to 357 B.C., also published texts detailing the importance of a chiropractic-like philosophy and treatment. He is quoted in his writings as saying, “Get knowledge of the spine, for this is the requisite for many diseases”.

In 1895, D.D. Palmer founded the Chiropractic profession in Davenport, Iowa. Palmer was well read in anatomy and medical journals and was known as a magnetic healer.

He had this idea about chiropractic, where your health could be improved by allowing the spinal nerves to work as they were designed.

His first “patient” was Harvey Lillard. Harvey had been born able to hear, but had heard a pop in his neck some time prior and had lost his ability to hear. D.D. Palmer performed the first “adjustment” which was specifically designed to correct a spinal misalignment he had located on Harvey. Following that adjustment, Harvey was able to hear again! They initially thought they had found the cure for deafness until no other deaf patient had their hearing restored.

However, they did notice other improvements in patients and began to study their phenomenon. They began a clinic, in which patients were evaluated by medical doctors and then adjusted by chiropractors. In 1897, D.D. Palmer founded the Palmer School of Chiropractic. At that time, you could become a chiropractor in just a few months and only slightly more in cost than becoming a chiropractic patient.

Later, his son, B.J. Palmer really developed and is largely responsible for Chiropractic becoming as prominent as it is today. Throughout the history of Chiropractic, it has been the patients and their restored health that has kept it alive.

Chiropractors were initially thrown in jail for practicing medicine without a license until Chiropractic became its own health profession with a licensing board. Now, Chiropractic is licensed and recognized in every State and in countries around the world.

It has gone from being “alternative medicine” to much more mainstream and people commonly visit chiropractors or at least consider chiropractic care as a viable option for their condition.