The Athletic Room: A Review

Brrrr! That’s all most people can think of when they first hear about cryotherapy. I was participating in an event at my local CrossFit gym and The Athletic Room was running a promotion. Something to help with inflammation and soreness? As sore as I was already, I couldn’t have been more receptive to trying it out. I’m always on the lookout to try new therapies that may help my patients, and I know cryotherapy has been a frequent topic of conversation. 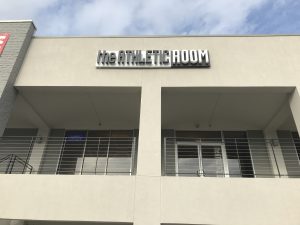 My wife, son and I visited their Bellaire location (4900 Bissonnet St Ste 200, Bellaire, TX 77401) and were met by smiling faces and an explanation of what to expect. In a nutshell, we would be shown to a changing room where we would strip off everything except for our underwear. We would then wear special gloves and shoes and wrap ourselves in a robe before stepping out to the cryotherapy area.

The cryo area is in full view from the reception area, which you might think would be intimidating, but it’s not. Since most people (me included) have no idea what we’re getting into, the more we see the better. The Athletic Room is spotless clean and bright, which definitely adds to your comfort level.

I don’t know why, but everyone was so nice that I totally forgot I was about to be frozen. After changing into my cryo gear (all provided by them), I stepped into the chamber and the nitrogen vapor began to slowly drift all over my body (except for my head, which was outside the chamber). Kailee Wong (owner and former Houston Texan) was running the machine for us that day. He’s super-friendly and really kept my mind off the fact that my body was being lowered to 30 degrees. 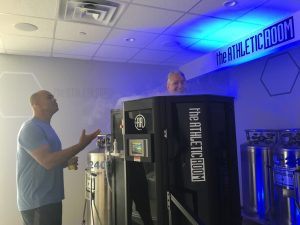 The operator is there as a safety precaution. He’s talking to you the whole time to keep your mind off things, but also to make sure you’re okay. The machine will periodically require the operator to press a button to keep the therapy going. This is a failsafe mechanism that would keep you from freezing to death if the operator got distracted or otherwise impaired. The entire session lasts just a few minutes.

As Kailee was talking, I slowly started to realize, “Holy crap, this thing is getting cold!” You’re in there for such a short time and that’s all you really need. It’s enough time to get your endorphins pumping and I’m sure this is 100% better than sitting in an ice bath. Before you know it, it’s over.

There was an immediate positive feeling, and not just because I was leaving the cryotherapy chamber. There’s the endorphin release (your body’s natural painkillers – like a “runner’s high”) and your skin reacts to the cold, sending messages to the brain that sends the body into survival mode by shunting blood from the extremities to the core where the blood is enriched with oxygen, enzymes and nutrients. 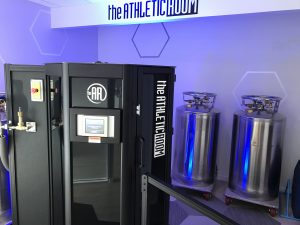 As the body warms back up again, this nutrient-rich blood is then pushed back to your arms and legs. The enriched blood promotes internal organ regeneration, gets rid of toxins, starts a cell renewal process, triggers replacement of cells and eliminates dead cells from peripheral tissues. It’s more rejuvenation at a cell level as much as regeneration and reduction of inflammation.

I’m not a fan of being cold, but definitely preach the benefits of cold over heat to my patients for reducing inflammation and pain. The Athletic Room offers packages that allow for more frequent cryotherapy sessions. He points out that the more consistent you do the therapy, the better you’ll do. I would say that’s true of nearly every healthy thing I can think of, so keep that in mind.

Getting adjusted just one time is helpful, but getting adjusted regularly yields compounding benefits. Same with eating healthy, getting enough sleep, and stretching. In a study on arthritis patients, pain reduction definitely occurred post-treatment, but it was unclear on how much doing the cryotherapy regularly would help.

This is the Athletic Room, though, and athletes are seeing more benefits than us when it comes to cryotherapy. Famously, Lebron James is using this therapy to keep his body in tip-top shape. If you’re an athlete, you’re probably all over this already. If you’re not, well, you can still see benefits in reducing inflammation and it’s worth a try. 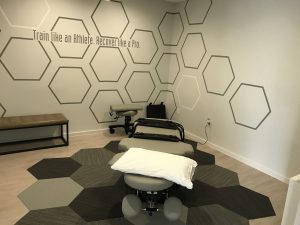 Stretching is becoming fashionable again, and the Athletic Room has some great therapists to help out with this. Recently, I noticed that even Massage Envy is offering training to their therapists so that they can offer stretching sessions to help more people see benefits for their muscles.

I went on a separate visit to check out the stretching sessions offered by The Athletic Room. If you choose a 30-minute session, you can get your upper or lower body stretches. A full hour would be required to get in the whole body. I definitely see the benefits to patients that get massaged on a regular basis. I could see alternating between massage sessions and stretch sessions.

Ideally, you’re stretching consistently on your own at least three times per week (if not more). Since that doesn’t seem to happen with many of my patients, showing up somewhere and having a professional stretch you can be a great alternative. I don’t know how much benefit you’d see from just one session, though. At a minimum, I would think you’d want to schedule a weekly session until you start to notice some differences.

Even with consistent professional stretching, you would need to supplement with your own stretches if you really want to become flexible. I enjoyed my stretching session, but felt like he probably could have been more aggressive with me. When someone receives their first chiropractic adjustment, I don’t try to go all out because I don’t always know how their body will respond. I would imagine that was the case here. In any subsequent visits, I’m sure I could ask for a deeper stretch.

The Athletic Room features NormaTec compression sleeves. The sleeves are placed on your arms, legs or hips and are then inflated to mold to your body. You’ll then feel pulsating air begin to compress and then release, which feels similar to the kneading feeling of a massage.

The system is designed to reduce swelling and fluid build up while increasing blood flow. This will allow in more nutrients and oxygen enabling a faster recovery. The system costs well over $1,000 on its own, but does help with muscular aches and pains. I don’t know that this is really something non-athletes will target as an absolutely required therapy for say, sitting at a computer all day, but it was relaxing. 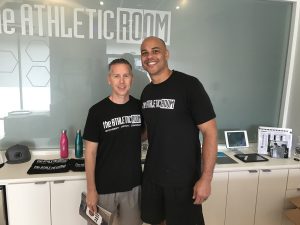 My experience at The Athletic Room was positive. If you’re an athlete, chances are you’ve already heard of all of these therapies and have had a chance to meet Kailee and his team. For the non-athletes, there’s still plenty to check out at this clean and inviting clinic.

I would start with the cryotherapy, even though most patients I talked with about this place indicated was the scariest. Cryotherapy is all over the news and has been shown to have a lot of benefits. The stretching is helpful, but you should already be stretching! Use their stretching sessions to supplement what you’re already doing. My CrossFit coach says the Normatec system is great and the best therapy offered, but I still don’t see it as a must for most of my patient base.

Have you tried any of these? Share your thoughts!

Dr. Philip Cordova is a chiropractor in Houston, Texas. He grew up in Phoenix, Arizona and decided to become a chiropractor after hurting his back as a teenager and getting help from chiropractic care. He is speaker on health & posture. Click Here To Read His Full Bio

There are some surprising benefits of chiropractic care. END_OF_DOCUMENT_TOKEN_TO_BE_REPLACED

There are alternatives to using decompression therapy for END_OF_DOCUMENT_TOKEN_TO_BE_REPLACED

“What is chiropractic care?” Why do so many END_OF_DOCUMENT_TOKEN_TO_BE_REPLACED